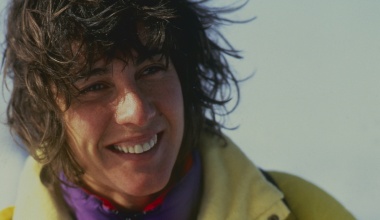 By Claude Gardien Catherine Destivelle started making a name for herself in the climbing world during the 1980s, a time when sport climbing was exploding in popularity and grades were rising... 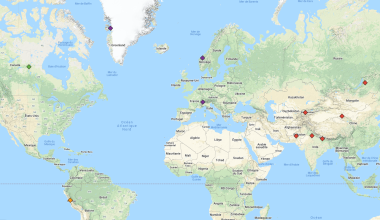 The following is a representative list of significant, innovative ascents in most mountain regions of the World, climbed during 2019, in alpine style, and without using drilled equipment. This is... 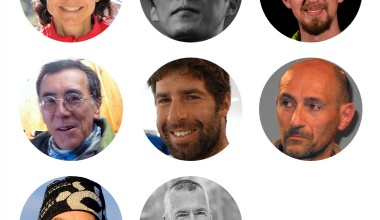 For several years our jury has comprised only highly experienced alpinists. This year is no exception, with several jury members having climbed outstanding new routes and/or were awarded Piolets d'Or. gerlinde... 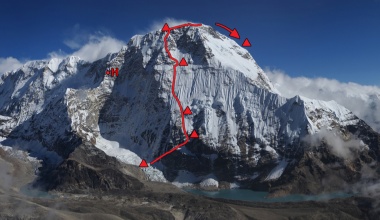 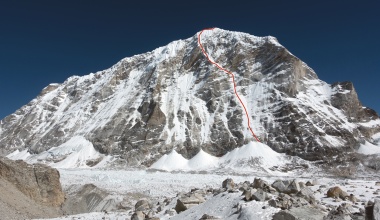 ©Tino Villanueva/American Alpine Journal ALAN ROUSSEAU - TINO VILLANUEVA (USA)WEST FACE, RELEASE THE KRAKEN, 1,600M, AI5 M5+, OCTOBER 13-17 ROUND TRIP FROM A GLACIER CAMP BELOW THE FACE. In 2012, on their... 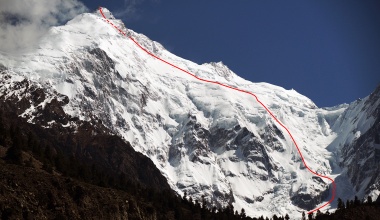 Catherine Destivelle started making a name for herself in the climbing world during the 1980s, a time when sport climbing was exploding in popularity and grades were rising rapidly. The media focused its attention on this new discipline, ignoring the fact that Catherine had been an alpinist from a young age. Shortly after discovering climbing at Fontainebleau at the age of 12, she was tackling big routes in the Mont Blanc massif. However, by the mid-1980s she had started participating in sport-climbing competitions and her success in these, and the fact she became the first woman to redpoint 8a, turned her into a rock climbing star. But few people knew that as a teenager she had climbed some of the biggest routes in the Alps.

In 1990, the rock star made her mountain comeback with an impressive solo ascent of the Bonatti Pillar on the Petit Dru. This finally gained her recognition as an alpinist. She went on to open a new route on the west face of the Petit Dru over 11 days, before completing a solo winter trilogy;  the north face of the Eiger in 1992, the Walker Spur on the north face of the Grandes Jorasses in 1993, and the Bonatti route on the north face of the Matterhorn in 1994. This latter route is still rarely climbed today. It was her second big Bonatti route and the first time a woman had climbed at such a high standard in the Alps. However, Catherine didn’t just want to be known as an accomplished female climber, she wanted her performances to be measured against those of any alpinist, no matter their gender. How many people could claim to operate at this standard? Catherine had proved that women could climb just as hard as men.

She went on to embrace the world of high-altitude, technical alpinism. In the Himalaya and Karakoram she made the second free ascent of the Slovenian Route on Trango Tower, climbed the southwest face to the summit ridge of Xixabangma, and attempted the south face of Annapurna, the west pillar of Makalu, and the north ridge of Latok I. She made two significant first ascents in the Sentinel Range of Antarctica. She also climbed in America and on the desert rock spires of Mali and the Sinai.

Catherine inevitably attracted the attention of mountain photographers and film-makers. In 2007, she starred in Rémy Tézier’s Au-delà des cimes, a film that showcased alpine climbing with superb imagery. In the film Catherine climbs Voyage selon Gulliver - a difficult rock climb on the Grand Capucin. However, the main focus is on the beauty of movement, the pleasure of bivouacking on the summit of the Grépon with her sister and an ascent of the Aiguille Verte with friends. The title of the film translates as ‘beyond the summits’ and expresses the idea that the value of alpinism goes beyond the difficulty of an ascent. The immersion in the mountain landscape and the bond of friendship between climbing partners provide memories that last much longer than an elevated grade or a fast time.

After writing a charming autobiography (Ascensions, Editions Arthaud), it came as no surprise when Catherine established her own publishing house, Les Éditions du Mont Blanc. Through this, she published outstanding texts from little-known writers, and quickly gained a reputation for her sound editorial judgement and the quality of her productions. As with mountain climbing, she has gone on to leave her mark in the publishing world. Her creed has always been to keep moving forwards, without ever worrying about her status as an alpinist or an editor.

A celebration of mountaineering

The purpose of the Piolets d'Or awards is to raise awareness about the year's greatest ascents across the world.  They aim to celebrate the taste for adventure, the bravery and sense of exploration that lie behind the art of climbing in the world's great mountain ranges. The Piolets d'Or draw their inspiration from mountaineering's rich history.  They are a celebration of a sense of partnership and solidarity, of shared experiences, and reward individual or collective achievement.

The Spirit of Modern Alpinism

More than just the recognition of a performance, the Piolets d'Or celebrates passion, spirit and values. The spirit of the Piolets d’Or draws its inspiration from the history of alpinism and the authenticity of true team spirit. The style should take precedence over the conquest of an objective.  Success is no longer about getting to the summit at all costs, employing all possible financial and technical means, (oxygen, fixed ropes, doping products, etc) or large-scale human resources (high-altitude porters or sherpas). The Piolets d’Or event encourages imagination in searching for innovative routes using a maximum of economy of means, making use of experience and respecting man and nature. The Piolets d’Or is attached to making climbing a shared and valued richness all over the world, capable of attracting the best of human ambitions whilst encompassing moral values and edifying behaviour. The Piolets d'Or event is therefore a celebration of an ethical alpinism, rich in emotion.

The Career Piolets d'Or was created to reward a career where the spirit has inspired the following generations, in the sense of criteria set down by the convention.

You are interested in supporting us ? Please ask for our partnership information...

The Piolets Jeunes is a gathering for diversity, exchange of experience, know-how and cultures.
It allows young people to experience a true mountain experience.

Because we are convinced of the major educational role of mountain activities, particularly in the context of education through sport, we wish to contribute to the development of mountain activities among youth. We also promote the spirit and culture of the mountain, in order to put young people in link:
- Using natural and cultural heritage and mountain with the territory
- With strong values related to these adventure land practices: the spirit of discovery, respect, solidarity, spirit climber, commitment, experience, progressive autonomy, and responsibility