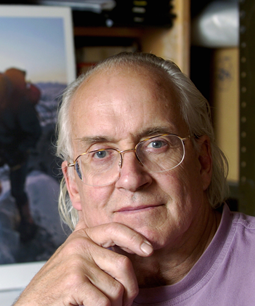 Doug Scott personifies mountaineering adventure and exploration on summits the world over.  He is the type of visionary who has shown that it is possible to climb some of the highest summits on the globe, or in the Alps, while in the company of a few friends and with just the contents of a backpack.

In 1967, he drove his lorry from Britain to Afghanistan to reach Hondu Kuch and climb Koh-e-Bandaka (6812m). He opened a magnificent pillar on Mount Asgard in Baffin Island in 1972, and in 1974 he participated in the first ascent of Changabang (6864m) in Garhwal, India.

Along with Dougal Haston, he summited Everest in 1975 via the South-West Face, an achievement which marked the pinnacle of big Himalayan climbs.  Reaching the summit late in the day, they then had to endure a bivouac on the south summit.  From then on, Doug devoted himself exclusively to alpine style climbing.  The pair would join forces again the following year to open a difficult 2800m route on the South Face of Denali (6195m) in Alaska.

In 1977, with Chris Bonington, he climbed The Ogre or Baintha Brakk (7285m), one of the most difficult mountains in Pakistan.  On the way down, he fell just under the summit and broke both ankles.  Continuing on his hands and knees, this incredible feat is amongst one of the most breathtaking in Himalayan history.

In 1979, he left for Kangchenjunga (8585m) with Joe Tasker, Peter Boardman and Georges Bettembourg; they achieved the first ascent of the North Ridge. That same year, Doug went to Kasum Kanguru with Georges, and to the North Face of Nuptse with Georges, Alain Rouse and Brian Hall.

In 1982, he opened a route, alpine style, on the South face of Shishapangma with Alex McIntyre and Roger Baxter-Jones.

He made several trips to K2, always in alpine style, and two determined attempts at the South-East Ridge of Makalu (8471m) in 1980 and 1983.  Both times, the team was forced to descend to the East Coomb, just below the summit from their altitude of 8180m and 8370m consecutively.

Doug Scott is also responsible for opening one of the most beautiful routes on Shivling, a 6543m summit in Garhwal, India.  The East Pillar, or the Ganesh arête, was first climbed in 1981 by Doug Scott, Rick White, Georges Bettembourg and Greg Child.  This legendary ascent will be remembered for its difficulty and beauty, as well as the impeccable style in which it was climbed.

Doug Scott and his friends have climbed alpine style on all the major massifs on the planet. In doing so, they have brought alpine style to the fore, when it was in danger of being lost in the myriad of technical paraphernalia.  For Doug, the friends he climbs with are as important as the objective itself.  Just like his trips in his lorry, he lives his expeditions like a nomad, with his friends and companions, and sometimes even with his family.  His children discovered the Himalayas at a young age.

Since 1989, Doug Scott has worked tirelessly with the Nepalese population founding the Specialist Trekking Co-operative (which became Community Action Trek Ltd) whose revenue enabled Community Action Nepal (CAT), with Chris Bonington as patron, to be launched.  These organisations have created many projects in the domains of health, education and local economy, in which Doug is heavily involved.

This lesson in humility deserves to be told to today’s alpinists.

Made a CBE (Commander of the British Empire), Doug was also awarded a gold medal from the Royal Geographical Society.