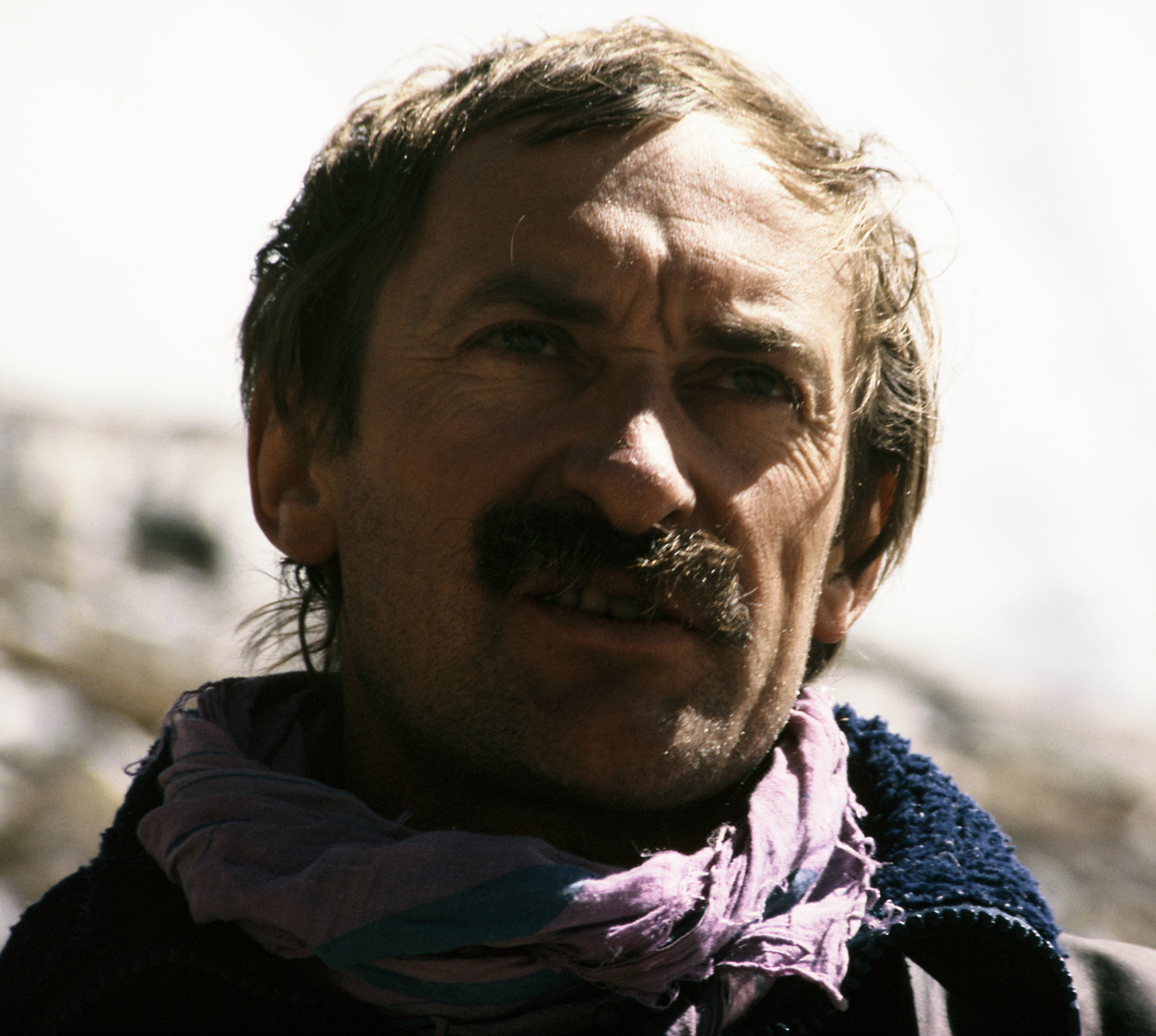 Born in January 1950, Krzysztof Wielicki remains one of the foremost mountaineers from "the Golden Age of Polish Himalayan Climbing". He started climbing when aged 20, during his years of formal education (a degree in electrical engineering). In common with most Polish mountaineers from that era, Wielicki progressed steadily on his road to the great peaks of the Himalaya-Karakoram, first climbing extensively in the High Tatra, where perhaps his finest achievement was the first winter ascent of the complete Pillar of Kazalnica (1973). He also climbed in the Alps and Dolomites, where he made the first one-day ascent of the Franco-Italian route on Punta Tissi, a pointer towards the fast ascents that would become legendary in later life.
In 1974 he graduated to the Caucasus, where in this and the following year he climbed difficult routes on the northern aspects of Dych-tau, Krumkol, and Koshtan-tau. In the 1970s the Poles were very active in Afghanistan's High Hindu Kush, so it is unsurprising that Wielicki's first experience of high altitudes took place there. In 1977, as a member of the Wroclaw Mountain Club Expedition to 7,116m Koh-e-Shakaur, he and two companions made a multi-day alpine style ascent of the 2,600m Left Buttress on the northeast face. He followed that in 1978 with a visit to the Pamir and rapid ascents of both Pik Communism and Pik Korzhenevskaya.

In 1979 he made his first visit to the Himalaya. This produced another notable alpine style first ascent in difficult circumstances - a six-day push up the west face of Annapurna South (7,219m). However, it was the following year that he sealed his place in mountaineering history, when the great protagonist of Himalayan winter mountaineering, Andrzej Zawada, invited him on an expedition to Everest. On February 17, 1980, Leszek Cichy and Wielicki reached the summit, thereby opening a new chapter in mountaineering by making the first winter ascent of any peak over 8,000m.

In the 1980s Wielicki would make two more first winter ascents of 8,000m peaks: on January, 11, 1986 he stood on the summit of Kangchenjunga together with Jerzy Kukuczka, and on December 31, 1988, he summited Lhotse alone. The latter ascent was quite remarkable. Four months previously he had attempted, in alpine style, the unclimbed 1,200m west face of Bhagirathi II in the Indian Garhwal. About half way up the wall the team was struck by rockfall, which killed one of the members and badly injured Wielicki, who had spinal fractures. He was still recovering on Lhotse, and wearing an orthopaedic corset when he reached the summit, without supplementary oxygen, in a single push from Camp III at 7,400m. By this stage in his career Wielicki was already well-known for being able to move very fast in thin air. On July 14, 1984, he made the first one-day ascent and descent of any 8,000m peak, when he reached the summit of Broad Peak in 15½ hours from advanced base (a total of 22 hours round trip, of which 19 were spent
climbing). The same year he climbed a new route on Manaslu.

Perhaps his most notable alpine style ascents on the great peaks were made in the latter part of his main climbing career. In 1990 he soloed the east face of Dhaulagiri, reaching the northeast ridge at 7,800m and descending from that point in bad weather, as he had already reached the summit via the ridge two weeks previously. He pioneered a direct entry into the central couloir on the east face but then more or less followed the 1980 Anglo-French-Polish route to its exit onto the northeast ridge. In 1993 he chose the southwest face of Xixabangma to create a new route, solo, to the summit of an 8,000m peak. This face already had a history of alpine style ascents, with the 1982 British route, the 1986 Slovenian Route, and 1990 Polish-Swiss route. As with his climb on Dhaulagiri, the main difficulties occurred in the upper section of the face, just before reaching the summit ridge.
Both these climbs provided difficult moments, but it is his 1996 solo ascent of the Kinshofer Route on Nanga Parbat that Wielicki feels is the most demanding climb of his life. After successfully reaching the summit of K2 via the north ridge (and making an open bivouac in a crevasse at 8,400m on the descent) he moved directly to Nanga Parbat base camp, where he planned to join a Polish expedition on the Kinshofer. But it was late in the season, and the expedition had already left the area. With little knowledge of the route, and no one else on the mountain, he decided to give it a try on his own, reaching the summit six days after leaving the village of Chilas. With this ascent he became only the fifth person to have climbed all 14 8,000m peaks.
After Nanga Parbat, Wielicki never returned to the highest levels of mountaineering, but elected to lead many expeditions, including two unsuccessful attempts on K2 in winter, and a successful, but tragic, first winter ascent of Broad Peak. He also continued to make first ascents. He made two exploratory forays into rarely visited valleys of the Karakoram, in 2011 completing first ascents of three 5,000+m peaks above the Koksil Glacier, and in 2012 a sub-6,000m peak in the Virjerab Muztagh. He is a member of the Explorers Club, was presented in 2001 with the Lowell Thomas Award for Mountaineering, and in 2018, together with Reinhold Messner, received the prestigious Princess Asturias Award for Sports. This was the first time the award had been bestowed on alpinists.