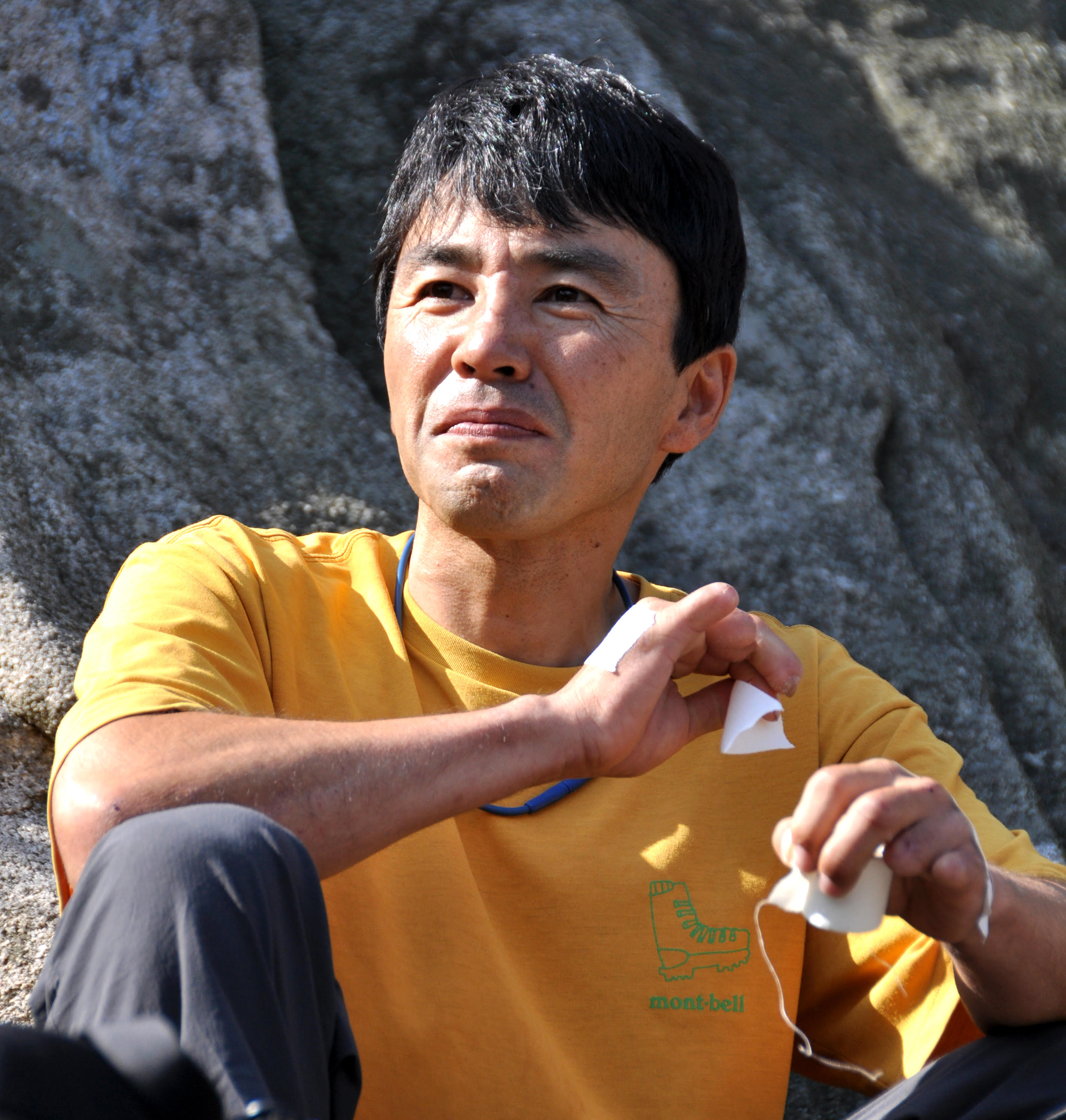 Seen from Europe our view of Japanese mountaineering can often be cloudy. On the one hand Japan has a very prolific history in exploration and first ascents, notably in the Himalaya and Karakoram. On the other hand, we associate that history almost entirely with large-scale, siege-style ascents. In the last two decades we have seen an emergence of bold climbs in alpine-style from young Japanese alpinists, for example, members of the "Giri Giri Boys", Kazuya Hiraide, and the first female to have her new route awarded a Piolet d'Or, Kei Taniguchi. Their climbs have received considerable applause, and several have been awarded Piolets. However, the name of one of their countrymen was known globally for his impressive alpine-style climbing well
before the new millennium. That name – Yasushi Yamanoi – perhaps less recognizable in the Western Hemisphere but revered in his own country, first started to appear in international mountaineering magazines in the second half of the 1980s. The journey of this "true man of honour, a sort of contemporary Samurai", as ropemate, friend and Piolets Career Awardee, Voytek Kurtyka, likes to describe him, is a voyage of great adventure, achievement, and style through major climbing arenas of the world.

Yasushi Yamanoi was born in 1965 and started climbing, on his own, after being inspired by the French film, Mort d'un Guide. By 14 he was climbing short rock routes, and in high school he free soloed many multi-pitch climbs, leading other activists to describe him as "the man closest to heaven". After leaving school Yamanoi concentrated on improving his rock skills, endeavouring to become extremely proficient in crack climbing and hard aid. Where else to go in the mid-1980s but America. He spent three to five months in the USA each year from 1984 to 1987 [at times working in a Los Angeles restaurant] and was able to come away with ascents of Cosmic Debris (5.13a), and the infamous Sphynx Crack (5.13b) in the South Platte area of Colorado. At this time, he was free soloing routes of 5.11a. In 1987 he travelled to the Alps to make the first solo ascent of the French Direttissima on the Dru. A new route and a big adventure, again solo, on the 1,400m west face and north ridge of Mount Thor, Baffin Island, followed. Then in July 1990 he made mountaineering history by becoming the first person to solo Fitz Roy in winter.

He entered the world of high altitude climbing in 1991, when as part of a conventional Japanese expedition he reached the summit of Broad Peak. Whilst the experience convinced him that he would never again climb in this heavyweight style, the expedition had other benefits: also reaching the summit was Taeko Nagao, one of Japan's leading female mountaineers. They would become inseparable partners, marrying in 1996. The following year Yamanoi would summit Ama Dablam during the Nepalese winter via a new route on the west face and southwest ridge.
In post monsoon 1994, on Cho Oyu, Yamanoi joined an extremely elite club, whose few members have soloed an independent new route on an 8,000m peak. While Taeko, with another female Yuka Endo, made the second ascent of the Kurtyka-Lorétan-Troillet route on the southwest face, Yamanoi climbed a new 2,200m line to the left. Arriving at the summit before the female team, Yamanoi had to find his way down the normal route, which had no track at that time. He feels this was his finest ascent, although for the most technically difficult climbing of his mountaineering career he cites his solo first ascent of the east face of Kusum Kanguru in 1998.
A return to the Karakoram in 1995 resulted in the first ascent of the southwest face of Bublimotin, an 800m wall at 5.10 A3+ above the Hunza Valley, Pakistan. It was climbed capsule style in 12 days with Taeko and Daisaku Nakaga. Five years later the couple would join forces with Voytek Kurtyka for an attempt on the unclimbed east face of K2. Thwarted on this objective by bad weather, Yamanoi made a solo ascent of the south-southeast spur (commonly referred to as the Cesen Route), reaching the summit in 48 hours – the fastest ascent of the route at the time. Naturally, it was without supplementary oxygen. Next year the three returned to attempt the north face of Latok I, but the weather interfered again and instead they made a new route – Vertical Picnic (5.10 A2) - on Biacherahi Central, climbing the south face over six days.

The 2002 expedition to Tibet to make the second ascent of the Slovenian Route on the north face of Gyachang Kang, the rarely climbed 15th highest summit in the world, would be life changing for the couple. Climbing in pure alpine-style Taeko stopped at 7,600m, leaving Yasushi to reach the summit alone in deteriorating weather. The descent turned into a major epic of avalanches, loss of vision, and frostbite. On returning to Japan both underwent considerable amputations (Taeko had already lost digits on Makalu), with Yasushi losing all toes on his right foot and a total of five fingers. Characteristically, before evacuation from below the mountain, Taeko had made Yasushi promise that they would return to remove all their garbage, which they were unable to take out. Recovery was understandably slow, but by 2005 Yasushi was able to put up a fine new route on the north face of Potala Shan in the Siguniang National Park, China. Jiayou, climbed in capsule style over seven days of generally poor weather, had 18 pitches up to 5.8 A3+, though the summit was not reached. Later, with his wife and Satoshi Kimoto, he would put up Orca (1,250m, 5.10+ A2) on the rock walls of Milne Land, East Greenland, and by 2011 had – impressively - refined his crack climbing to make an ascent of Zombie Roof (5.13a) at Squamish. His latest ascent in the Himalaya, in 2017 with Takaaki Furuhata [with whom he had previously been forced to retreat from high on the coveted north face of Kangchung Nup in the Khumbu], was the first of Rucho, a 5,970m peak in India.

But we should look beyond these successful first ascents to a remarkable collection of solo attempts in excellent style. The month before his ascent of Ama Dablam, Yamanoi made a spirited attempt on a new line up the 1,200m west face of Mera Peak, Nepal. The Japanese spent five days climbing 26 pitches up to UIAA VI and A4 before having to retreat from close to the end of the difficulties when the wall above turned blank. He retreated from 7,000m on the still unclimbed east face of Gasherbrum IV, from 7,300m on Makalu when hit by a stone on the unclimbed west face, from the west face of the rarely visited Karjiang - a 7,000m peak on the Tibet-Bhutan border, and from part way up the still unclimbed northwest ridge of Tahu Ratum in the Karakoram.

Yasushi Yamanoi has generally adopted a humble lifestyle, originally living a simple life during the winter months with income earnt from portering on Mount Fuji. This and his charisma are factors that have endeared him to many climbers, not only in Japan but also in South Korea. His 2004 autobiography, Vertical Memories, written during his frostbite convalescence, was highly popular in Japan, but the 2005 book, Frozen, by famous Japanese author, Kotaro Sawaki, about the Gyachung Kang survival, became a best seller and made Yamanoi's name well-known in Japan to those outside the climbing community. In 2011 he was the recipient of the second Piolets d'Or Asia Career Award.

Whether solo, as a married couple, or with friends, Yasushi Yamanoi's climbing has shown great creativity, commitment, and resilience. His minimalist style and often discreet ascents paved the way for younger Japanese climbers to operate in modern alpine-style. Together with a great respect for the environment through which he travelled, these qualities make Yasushi Yamanoi a worthy recipient of the 13th Career Award.

Lindsay Griffin and Rodolphe Popier, with input from Hiroshi Hagiwara