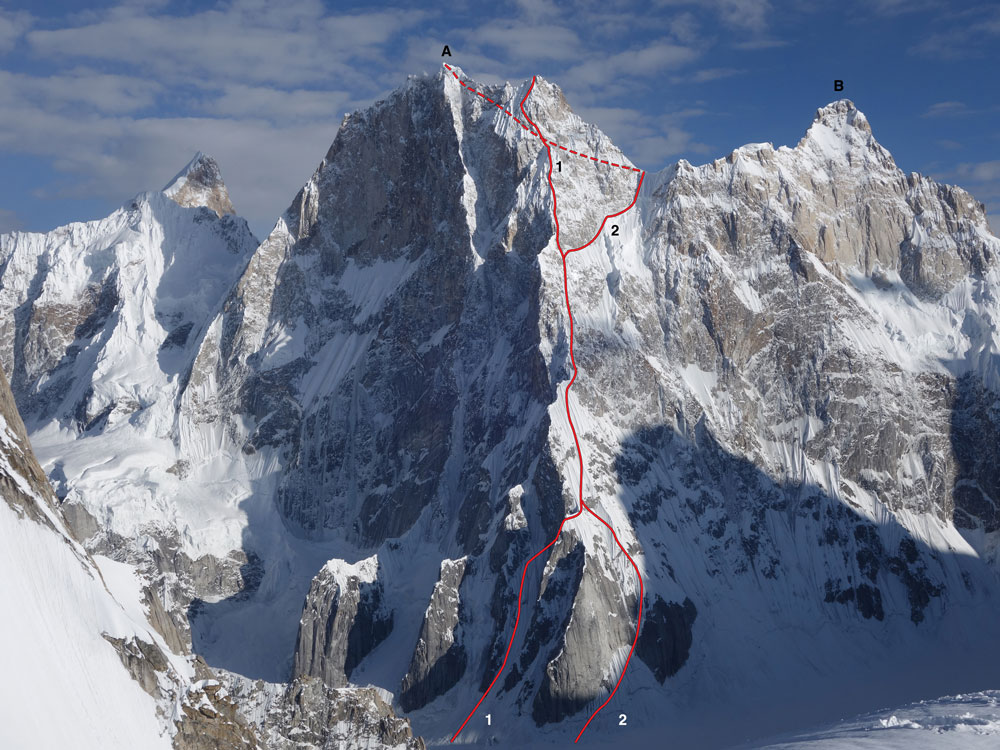 Seen from the north,
(A) Latok I (7,145m) and (B) Latok II (7,108m).
(1) The 2018 Russian attempt on the north ridge, reaching the summit ridge at approximately 7,050m.
(2) Anglo-Slovenian route to make the second ascent of Latok I, passing through the west col to finish via the southern slopes.
©Sergey Glazunov/American Alpine Journal

In 1978 four Americans attempted the "Walker Spur of the Karakoram", the north ridge of Latok I from the Choktoi Glacier. Jim Donini, Michael Kennedy, George and Jeff Lowe spent 21 days climbing over 100 pitches and had probably surmounted all the difficulties, when a combination of wind, cold and Jeff Lowe’s rapidly deteriorating condition due to altitude sickness forced a retreat. It remains one of the finest and most notable near misses in the history of alpinism. Despite literally dozens of subsequent attempts over the next 40 years, no one came close to reaching their high point of nearly 7,000m. The first and to date only ascent of the mountain was made in 1979, when a Japanese team reached the summit from the south.

Tom Livingstone met Luka Stražar at an international winter gathering in Scotland. Together with Aleš Česen they travelled to the north side of Latok I, where Česen confided, "we think there is a better way to the summit than the full north ridge". American Josh Wharton, who travelled to the Choktoi four times to attempt the north ridge, envisaged a line that would climb the right flank of the ridge, then slant up to the (west) col between Latok I and II. From there his proposed route crossed onto the south side of the mountain, where easier terrain would lead to the top. This was the route eventually followed by the Anglo-Slovenian trio, who climbed generally good ice runnels and névé on the right side of the ridge to around 6,400m, at which point they angled up right to reach the west col at 6,700m. From there they followed south-facing snow slopes in generally stormy weather to the summit, which they reached on their fifth day. Descending approximately the same line, the team regained base camp three days later, having made only the second ascent of this prestigious mountain in the Panmah Muztagh, and the first from the north. 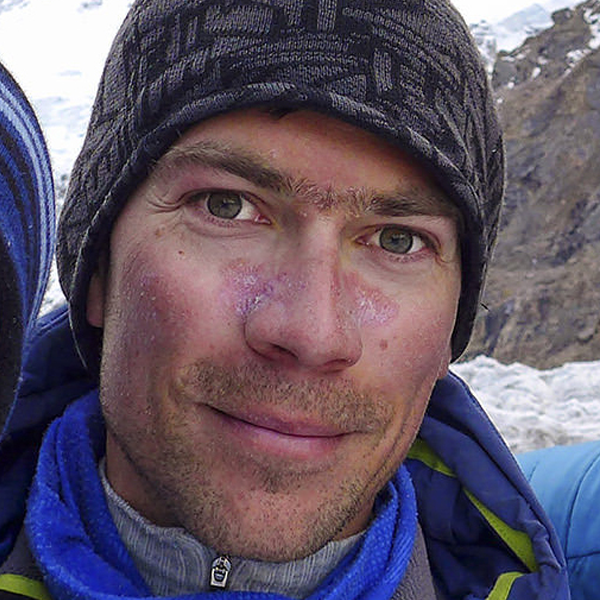 Ales Cesen was born in 1982 and from 1990-1999 took part in climbing competitions at national and international levels. After this he turned to the mountains, at first climbing in the Alps, but then further afield to places such as Scandanavia, Africa, Yosemite, Alaska, Nepal, Pakistan, India and Tibet. Much of his early time in the mountains was in the company of his brother Nejc. In 2014 he completed a PhD in Material Science, but three years previously he had become both a father and a fully qualified IFMGA mountain guide. He now has two children and earns his living from guiding. Notable ascents include: a new route on the 1,700m south face of Pik Gorky (6,050m) in Kyrgyzstan (2003); a new route on the west face of Karejiang III (6,824m) and an attempt on Kula Kangri (7,538m) in Tibet (2005); a free ascent of the Slovenian Route on 6,251m Trango Tower (2006); the second ascent of the Anderson-House-Prezelj route on K7 West (6,858m); the first ascent of the north face of Hagshu (6,657m) - an ascent that would gain a Piolet d'Or in 2015; the northwest ridge of Gasherbrum IV as far as the north summit (ca 7,900m) in 2016, and hard new route on Arjuna (6,250m, second ascent of this peak) in the India Himalaya (2017).

Luka Strazar was born in 1988 and went on to study geography at university in Ljublijana. He began climbing with his father, and eventually became an IFMGA mountain guide. He made the second ascent of Kaveljc on the north face of Triglav. On 2011, on his first expedition to the Himalaya/Karakoram, he visited the Charakusa Glacier with Nejc Marcic, making the first ascent of the northwest face of K7 West (6,615m) by a route the pair would name Dreamers of the Golden Caves (1,600m, VI/5 M5 A2). This route was awarded a Piolet d'Or in 2012. The same pair visited Nepal in the autumn of 2012, where they made the second ascent of Janak (7,040m) via the difficult west face. In 2013 Strazar climbed a new route on the Ice Tooth (6,200m) and made an attempt to 6,600m on the nearby east face of Phola Gangchen (7,703m) in Tibet. In 2015 made the first ascent of the north face of Chugimago North (5,945m) and a new route up the west face of Chugimago (6,258m) in Nepal's Rolwaling Himal.

Tom Livingstone is a 28-year old semi-sponsored climber based in North Wales. He works as a Rope Access technician and an outdoor instructor, but packs as much of his own climbing as possible into each year. For instance, let's look at 2016, an exceptional year in which he made high-level ascents in Scotland both summer (E7) and winter (Scottish IX), a winter ascent of the Walker Spur, his first UK rock climb of E9, sport climbing to 8a+, an ascent of Divine Providence on the Grand Pilier d'Angle and the American Direct on the Dru in the same week, the third ascent of the House-Anderson route on the north face of Mt Alberta in Canada and finally, at the start of 2017, an ascent of the Supercanaleta on Fitzroy in Patagonia. Other notable ascents in the Mont Blanc Range include a free ascent in winter of the Leseuer Route (M7+) on the north face of the Dru, and a free ascent of the Original Route on the south face of the Fou. As well as the ascent on Alberta, in the Canadian Rockies Livingstone made the first winter ascent of Navigator Wall (700m., ED1 M7+ R, or Scottish VIII/IX) on the east face of Mt Sleese (2,439m) in one day (with the late Marc Andre Leclerc), while in Alaska's Revelation mountains he put up Fun or Fear (1,200m, M6 AI6 R 90°) on the east face of Mt Jezebel's northeast summit (2,880m). Livingstone's ascent of Latok I marked his first visit to the Himalaya/Karakoram.
FaLang translation system by Faboba