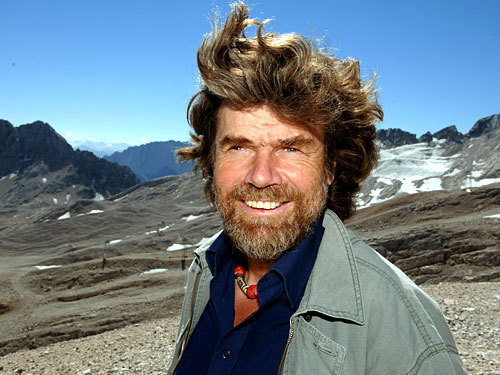 Reinhold Messner is best known as being the first man to have climbed all fourteen of the world’s summits of over 8000 metres.  But his career does not simply encompass these extraordinary exploits, for not only did Messner climb eighteen 8000 metre summits, he also transgressed the commonly accepted rules on several occasions, by taking giant leaps into the unknown.

The young Messner was first talked about in his native Dolomite region.  The story goes that in 1968, along with his brother Gunther, Messner opened a 550 metre route on Sass dla Crusc (also known as Heiligkreuzkofel), where a passage graded VIII (or 7a in the French grading system) was climbed for the first time.  The following year, he stunned the world of mountaineering by successfully solo climbing the two most difficult rock and ice routes of the time: the Philipp-Flamm dihedral of La Civetta, and the North face of Les Droites, making this only the fourth successful time it was climbed.  The climb, which took 8 ½ hours, had never before been successful without bivouacking at least twice.

In 1970, he participated in an expedition to Nanga Parbat’s (8125m) Rupal Face, one of the most difficult in the Himalayas.  On the summit with his brother, and without a rope, they decided to descend by the Diamir Face.  Gunther disappeared in an avalanche near the bottom of the face and after a gruelling ordeal, Reinhold managed to reach the safety of the valley.

On the South-East Face of Manaslu in 1972, he once again made a solo ascent of the summit.  In 1975, he participated in Riccardo Cassin’s expedition to the South Face of Lhotse, which ended in failure despite having a strong team.  Reinhold was already considering his next project: taking on the 8000 metre summits, alpine style, with a climbing partner.  He found his ideal climbing companion in Peter Habeler.  Together the two men showed their speed and mountaineering skills, notably on the North Face of the Eiger which they climbed in only 10 hours in 1974, a record at the time.  A few weeks after the failure on Lhotse, Reinhold and Peter opened a new route on Gasherbrum 1 (8068m).  It was the beginning of alpine style climbing on the highest summits on the planet.  In 1978, Reinhold opened a new route, climbing solo, on the Diamir face of Nanga Parbat, and later that same year, he and Peter Habeler succeeded in the first ascent of Everest without oxygen.  Most scientists thought such an exploit too risky as the extreme altitude of Everest is at the limit of what is humanly bearable.

This was followed by other performances, such as opening a new route, again solo, on the North Face of Everest in 1980 during the rainy season.  In 1982, Messner opened a difficult route on Kanchenjunga with Friedl Mutschlechner.  In 1984, new highs were reached with the first back-to-back ascents of two 8000 metre summits: Gasherbrum 2 (8035m) and Gasherbrum 1 (8068m) with Hans Kammerlander.  They notched up another success in 1985 when they opened a route on the West Face of Annapurna, and again in 1986, when Reinhold completed his 14th 8000 metre summit.  In between these successes, he made innovative attempts of the South Face of Makalu, as well as a winter ascent of the South-West Face of Cho Oyu.

Now a legend, both idolized and criticized, Reinhold turned his attention towards adventure and exploration (Tibet, Bhutan, Pamir, Gobi Desert, Greenland, Antarctica, South Georgia…). He supported environmental protection and became elected to the European Parliament in 1995.  At the end of his term he started work creating five museums dedicated to the mountains, to be known as the Messner Mountain Museums.  Through his foundation, he also became involved in the building of a school in the Diamir valley at the foot of Nanga Parbat.

In the early 1970s, when still a young climber, and only having just left the Dolomites, Messner published a prophetic piece of work called “The Seventh Grade”.  It contained the seeds which would herald the incredible progress which would mark this activity.  Messner’s inspirational book has left an indelible mark on alpinism and showed that he was a true visionary.